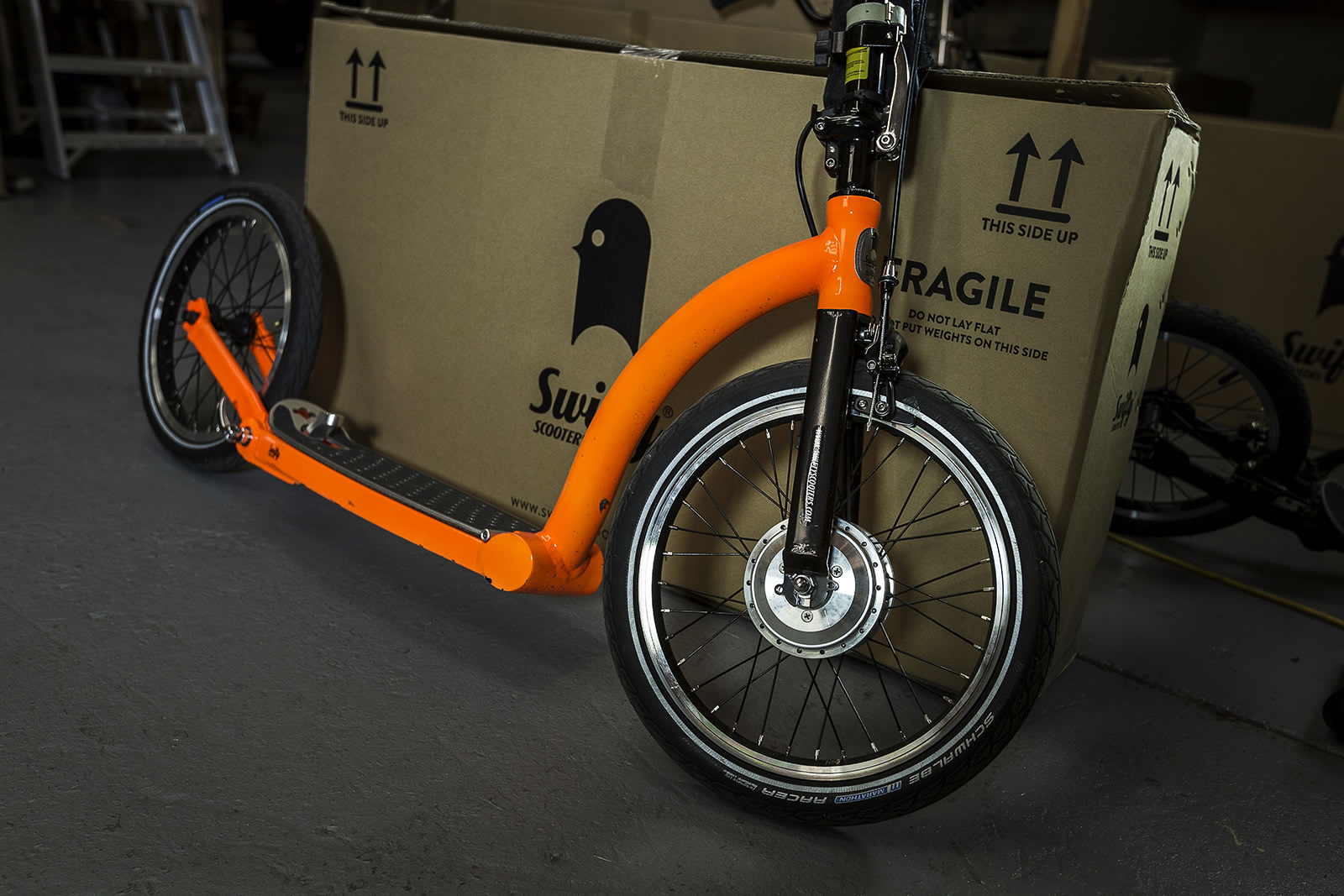 Good news for all kick scooter enthusiasts in Canada and the USA! Swifty Scooters are now available in North America through ScootCanda.com. Great, isn’t it? You can now get your hand on a SwiftyONE or SwiftyZERO without paying for shipping from Great Britain, and if you anticipate the 2017 launch of the SwiftyAIR, you could be the first in line. So what are you waiting for? Order your Swifty kick scooter now and experience the fun that everyone is talking about.

What’s the big deal about Swifty? They just make kick scooters, don’t they? And besides, it’s just a scooter. Well, if a Rolls-Royce is to a car, then Swifty is to kick scooters. Swifty is no ordinary company that design and assemble scooters. Their products do not just belong to a category – they belong to a different league as well. Ever heard of their flagship commuter scooter, the SwiftyONE? Launched in 2011, it is the world’s first premium folding kick scooter, and the best and the most beautiful too in the emerging market of adult kick scooters. The powers that be at Swifty will not stop designing kick scooters that meets the adult commuter’s needs.

The story of Swifty

A formidable husband and wife team fuels the success of the company that makes premium and contemporary foldable kick scooters for adults. Jason and Camilla Iftakhar founded Swifty in 2011 in the former’s native Manchester. There, they designed and hand built the original SwiftyONE, which they later launched in the same year to critical acclaim. The couple is not only passionate about sports and two-wheels, but also about eco-friendly design, sustainability, and urban mobility – concepts that are clearly evident in their scooters.

Jason and Camilla are both graduates of the Royal College of Art (RCA). Their prowess in design and shared interests, coupled with valuable work experience under different corporations, led to the founding of the kick scooter brand. Jason, the original creator of the SwiftyONE, is the brand’s product and eco-designer. He hand built a prototype of the scooter and present the early edition of SwiftyONE at the 100% Design London 2009. Camilla designs the brand’s accessories and apparel line. She honed her craft by creating sports and lifestyle apparel for sportswear companies such. Match made in heaven? Indeed!

What led to the idea of a folding kick scooter?

Jason once toyed with the idea of a folding scooter way back in 2001 while pursuing his degree in product design and engineering at Middlesex University. He only came up with a vision and a concrete plan a decade later. It was at university where Jason gained his first exposure to the concept of sustainability and eco-design.

Prior to graduation, Jason completed on-the-job training under two companies. First was a toy design consultancy that designs toys for a popular fast-food restaurant chain. It was a paid position, and it gave him his first real taste of the industry. Second was at a product design studio. At both placements, he was appalled at the lack of ethical and sustainable values. He was not pleased that people just paid lip service to sustainability and shout about being green and sustainable – but doing little or nothing to support it. Upon graduation, Jason went to pursue an MA in Product Design at RCA, where he was fortunate enough to learn from some of the design industry’s best and witness sustainability and eco-design in action.

After receiving his MA, Jason went to freelance for a design studio that assigned him to work on a solar-powered boat project, and later he departed to establish his own consultancy. While wanting to put up a design consultancy that adhere to ethical and sustainable values, he also dreamed of creating his own brand, one that will incorporate the concepts and values which he believe in.

The Iftakhars are not blind to the downside of working for big corporations, which they realized had drained them of their creativity. They decided to launch their own brand and product. They decided on an adult commuter scooter after they saw they saw the lack of alternative transport for commuters in London. So they founded Swifty, a company that itself offers amazing products that comes with smart and cool features that people will love.

Camilla, who once figured in a serious bike accident, described their Swifty kick scooters as the ‘missing link’ in public transport. For Jason, their scooters demonstrate the 21st century relevance to urban mobility. A folding adult kick scooter is a smart and eco-friendly way to get around town and city. It reduces the need for a car, and with that, it cuts down oil consumption and reduces pollution. Moreover, it makes the option of taking the train to work more desirable. Their customers no longer drive to the train station – they now scoot.

Swifty kick scooters are designed for urban leisure and commuting. They are compact, lightweight, ultra-slim, and easily foldable so riders can carry them around in public transport or else put in the trunk of the cab or car. They are not premium commuter scooters for nothing.

Proudly British made… with love

All Swifty kick scooters are hand built yet beautiful and stylish. It takes about an hour to build a scooter from scratch. This clearly shows how devoted the Iftakhars are as hands-on designers and builders. They are indeed taking their passion and their beliefs seriously, and their scooters to a whole new level.

By building Swifty, Jason has proven that British manufacturing and innovation go hand in hand. He is proud that their kick scooters are 100% “Made in Britain”. The Iftakhars and their staff design and assemble their products in-house at their Manchester workshop. They source parts from local suppliers, and manufacture the frames, front and rear forks, and footplates a few miles from their assembly line.

Local production allows Jason to keep eye on production and personally test every kick scooter before marking them out for market. It also enables Swifty to produce excellent and innovative products, even if they are hand built. Through the Swifty brand, Jason is instilling pride in British manufacturing and heritage.

Swifty scooters for all kinds of rides

What will be your choice of a Swifty kick scooter? There are two models currently available: the SwiftyONE MK3 (an improvement of the original SwiftyONE) and the SwiftyZERO MKII. SwiftyAIR MK2, the new model, will be launched next year.

The foldable SwiftyONE MK3 is redesigned with a complete new aluminum frame and front fork design to give you a more comfortable ride and increased stability at higher speed. Its pair of 305mm wheels offers a smooth and fast ride. The SwiftyONE MK3 kick scooters weighs 8.3 kg and supports a maximum load of 150kg (330 lbs).

The SwiftyZERO MKII kick scooter is non-foldable, yet it is lightweight, weighing only 8.2kg. Its design is sleek, its aesthetics is super slim, and its design is super lightweight. It has a host of redesigned specs, including a new frame and fork design to allow a smoother and more stable ride, and an improved frame geometry for a more comfortable scooting position. It also comes with a pair of 305mm wheels and supports a maximum load of 150kg (330 lbs). The SwiftyZERO MKII kick scooter is perfect for urban leisure and fitness.

The new model, SwiftyAIR MK2, is designed as an all-terrain adventure kick scooter, and scheduled for a 2017 launch. At 8.5kg, it is the heaviest of the three Swifty kick scooters. Its frame is designed for strength and flexibility, being made from CrMo steels. Its BMX cross style handlebars allow for an aggressive riding stance. Each of its 305mm wheels has 36 stainless steel spokes, providing super strength.

Have picked the right Swifty scooter for your kind of fun? Scoot now!