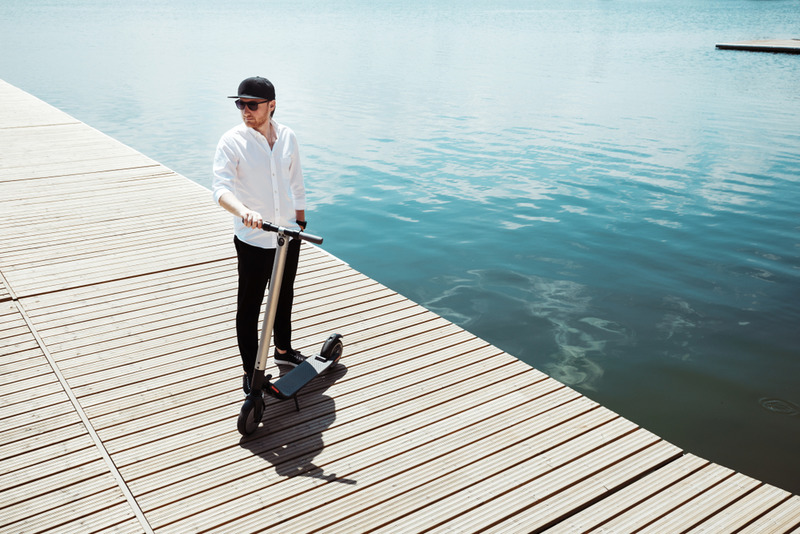 Electric Kick Scooters deliver micro mobility solutions for the city and its inhabitants. The invasion of these new fleet of transportation is not only a win solution for the user but also is the answer in air pollutant reduction thrown off the environment. There are many ways the e-kick scooter can help urban and suburban zones.

More cars come out of the production line every now and them contributing to the street nightmare of traffic congestion. Congested streets double the amount of greenhouse gases strewn out to our surroundings causing it to accumulate in our atmosphere. INRIX, a Kirkland Washington State based company providing information and data regarding traffic and parking to car makers, road authorities, and world governments, reports that five of the most congested metropoles in the world are in the US.

The research body found 25.2% of their driving time are on congested avenues. In Los Angeles, 12.7% of the commuters’ driving hours are in lumbering traffic. The urban city tops the list where drivers spent most of their time in slow moving traffic. INRIX also provided data that drivers throw away $1200 on wasted time and fuel, not to mention the double pollution it creates on the bumper to bumper stick up.

No Parking Problems for the E-Kick Scooters

Electric Kick Scooters helped in the reduction of traffic congestion. Lime Scooter Company stated that 30% of its e-scooter riders took the e-ride instead of riding a car. Now, that is a lot of space saved on the road and a great volume of carbon dioxide prevented in our atmosphere.

With cars left at home, parking problems lessened when electric kick scooters replace cars on short commutes. The e-vehicles takes riders to mass transit stations of buses, trains, and subways. Commuters can also use the e-rides from the transport depot to the frontdoors of their homes.

Electric Kick Scooters have the foldable feature for easy carry. Commuters can carry their e-rides on buses, trains, and subways. When they reach the stops, they could unfold the e-vehicle and ride along to their short destination. Upon reaching their offices or schools, riders can fold the scooters and tuck it in their desks for a worry-free parking.

Cars running on petrol contributes a large volume of greenhouse gas emissions in our environment. The cars’ internal combustion engine creates the energy to move the three to four  tonner vehicle from its origin to its destination. The burning of fossil fuels creates carbon dioxide thrown out to the atmosphere. Around 19.64 pounds of carbon dioxide comes out of the tail pipes of cars powered by a gallon of gasoline. A gallon of diesel fuel pump out 22.38 pounds of carbon dioxide.

The US Energy Information Agency released a report in 2013 of the state of Carbon Dioxide emissions against the use of gasoline and diesel fuels. The reports showed that gasoline consumption produced 1.095 billion tons of carbon dioxide while diesel fuel tantamount to 427 million tons of CO2 in the same year. The CO2 emissions from the burning of fossil fuels of cars and trucks totals 83% of the greenhouse gas while 28% comes from other energy-related emissions of plants and factories.

The invasion of the electric kick scooters did its part in reducing carbon dioxide strewn into the air by replacing car-rides in the streets of America. The e-vehicles will gradually be the future of transportation crediting its role to rid the streets of greenhouse gas emissions. Environmentalists sat a benchmark of zero CO2 emission in the surface of the earth. The step is to rid the atmospheric accumulation of greenhouse gases.

Steve Jobs and Jeff Bezos believed in this endeavor that the electric kick scooters impact to society will be bigger than computers and urban and suburban cities will take their cues from this simple mode of transportation. Even Bezos invested on the early Segway electric Scooter in 2001.

The innovative spirit of the people behind the business model propelled the adoption and acceptance of the riding public to use these e-vehicles that answer to their concerns. The last mile commute was once a problem for individuals and businesses to bring them closer to home or deliver the parcels on the doorsteps of customers. Today, electric kick scooters are the micro mobility solutions for short rides to their destinations.

Reduction of Noise Along the Roads

Electric Kick Scooters do not have combustion that makes a lot of noise when accelerating them. But with e-scooters riders will have a silent and peaceful ride without disturbing the peace in the neighborhood. These e-vehicles are silent as a bat stalking the streets on silent mode.

If you are going on a short distance and do not want to walk, an electric kick scooter is the best option to your destination. An e-kick scooter brand recommended for you is the Glion Dolly electric Scooter for the short commutes tou take. Buses and trains bring as far as the stations where they stay over; they don’t take you to the frontdoor of your destination. The solid option is the answer to the last mile concern of individuals and business delivery options on smooth pavements. This model can be towed on wheels when you are not using it and could stand alone when parked. It can be folded fast and secure. It has real electric brake with built in rear reflector and a bright headlight for night riding. When its raining, its wide fender supresses water from getting splashed up.

The Glion Dolly Model may not be the ideal electric kick scooter but it gets the job done to bring the rider from point A to point B. There are other interesting models that are out in the market for individual usage or for a fleet on share riding of electric kick scooters.

Other innovative platforms are set for application in the business of share riding, Bird electric scooter company has one for implementation to bring the venture of e-scooter rentals and involve more people in the business. The company called this innovation the Bird Platform.

The Bird Platform sells its new electric kick scooter models to interested entrepreneurs and provides access to its list of customers and the network of chargers scattered all over the country. The business owner remits 20% per ride the fleet makes  to Bird e-scooter company..