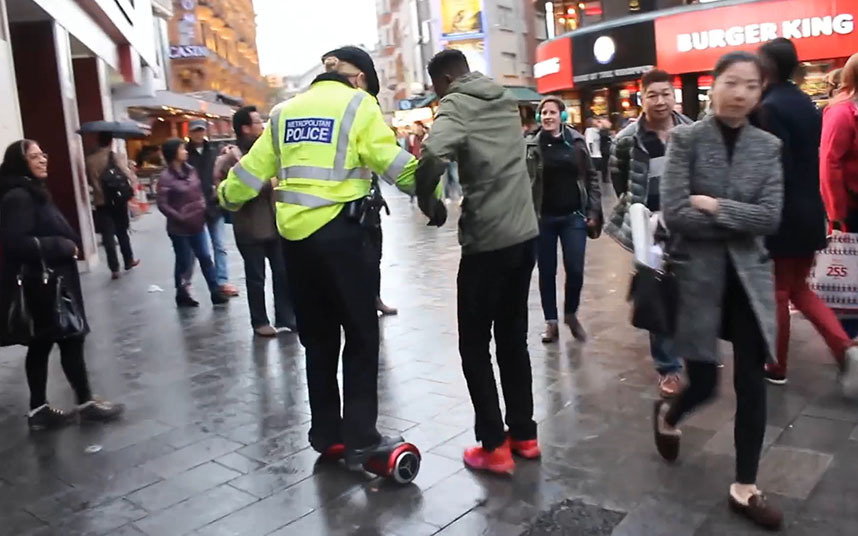 A Guide in Hoverboard Laws and Restrictions

Hoverboard laws existence was due to the 2015’s most popular gifts in holiday season, the hoverboards’, its popularity became rampant all over the US, Asia and other neighboring countries. Until such tragedies and accidents of fire and severe danger to human health causing bone injuries due to fall came out. From towns, streets, cities, schools, shopping centers, states even entire countries are threatened; such things made them take a very critical review of the product. There arises a team of Hoverboard regulators to enact hoverboard laws proposing an ordinance for the safety of the consumers. Bill Greenlee, a Philadelphia council member introduced the bill for hoverboards in January 2016 prohibiting the use of hoverboards for children under 12 years old unless complete safety protective gears are worn.

In the 24 states of America and abroad, there were several cases of fire-incidents happened several years ago, resulting from the use of hoverboard. The main cause is the overheated batteries and overuse of the device. These incidents made it banned from schools, airlines, universities, malls, and even in sports area. “Hoverboards are unsafe”; this is according to the U.S. Consumer Product Safety Commission. One reason of the creation of Hoverboard laws requiring manufacturers from small companies in China to submit safety standards certifying the safety of the hoverboard. These hoverboard laws banned the imitated products from China with low quality lithium-ion batteries which are believed to be the main cause of fire.

Cities where Hoverboards are banned

New York City prohibits the use of hoverboards in the streets and sidewalks. This thought lessens the number of people walking and roaming around the city streets. A fine of $500 was imposed by the hoverboard laws and bills for the violators. United Kingdom was the first City that ban hoverboards. Its highway act 1835 of hoverboard laws bans riding it on the pavement plus a fine of £500 and the payment fot any damage it will cause. The hoverboard laws in California enacted the AB604 last January 1, 2016, defining the speed of not more than 20kph and wearing a helmet. Imposing a fine of $250 for the violators. Netherlands, Hongkong and New South Wales, Australia also regulates the ban for hoverboards.

Schools where Hoverboards are banned

Among other public and private establishments which banned the use of hoverboards are the schools, colleges and universities. Accordingly, these students’ filled areas are the most prone to severe injuries because of falling from the hoverboards and are on the extreme danger of fire related incidents due to poorly manufactured lithium ion batteries. The hoverboard laws have been effective in schools in Alabama; in the University of Montevallo, University of Alabama and Auburn University. Same restrictions of the hoverboard laws in the Wyoming,  Wisconsin, Washington, Virginia, Texas, Tennessee, South Carolina, Rhode Island, Pennsylvania, Oregon, Oklahoma, Ohio, North Carolina, New Mexico, New Jersey, Missouri, Massachusetts, Maine, Louisiana, Kentucky, Iowa, Indiana, Illinois, Georgia, Florida, Connecticut, Colorado, California, Atlanta and Arkansas.

Airlines and Airports where Hoverboards are banned

Just this year, the Crown Prosecution Services’ website confirmed what the Metropolitan Police has announced on a tweet that, “hoverboards were illegal”. The hoverboard laws governing the use of hoverboards was fully written in the section 72 of the Highway Act of 1835, stating that riding hoverboards are ban on the roads. Under section 72 of the hoverboard laws, other illegal on the streets are sheep, ass, swine, mule, cattle and horse. This law further states that every person who will offend this law shall forfeit and is charged to pay any sum not exceeding over the damages it will cause.

Last January 1st 2016 was the effectivity of the new hoverboard laws in California. The raging numbers of people buying hoverboards for their loved ones, friends, daughters, sons and wives are increasing almost every day. As defined by the California State Highway Patrol as the “electrically motorized boards- which is a wheel designed and powered on electrically and going of not exceeding 15 miles per hour  and is commonly found on sidewalks in cities of San Francisco, San Diego, Los Angeles, and California. It is California Governor Gerry Brown who reinstated the hoverboard laws in which banning of hoverboards from public streets. Only riders on bicycle lanes, railroads and pathways whith speed of not more than 35 kph are allowed.

These hoverboard laws and restrictions are not made to offend the enjoyable moments of everyone who buys it, but these are enacted to protect the people from serious injuries, incur safety to the hoverboard riders and prevent a cause of a fire incident in any areas. In  Metrolink trains there will be no fines to pay but the rider will be asked to exit the area, and in Disney parks there is a total ban of any hoverboards. These are also imposed in order for the people to be self aware of their actions towards other people who do not own and use the hoverboards. It is expected that sooner than later, other entities will also provide their respective policies about the very popular hoverboards-the new hottest gadget in town.