Tragedy struck Oakland Park, Florida, when a 22-year-old man riding a GoPed was hit by a car and subsequently killed. After conducting an in-depth investigation, the Broward County Sheriff’s Office arrested 47-year-old Scott Roman. Roman was charged with fleeing the scene of an accident.

The collision occurred around 10:45 PM. The victim, Joseph Deverson was riding his GoPed scooter down a main road in Oakland Park. Not seeing Deverson riding in the road, Roman crashed into the victim. Police mention that because GoPeds are illegal to drive on public roads and motorways, Roman might not have faced any charges had he remained at the scene of the accident.

Joseph Deverson was not supposed to ride his GoPed on public roadways. This is most likely because they can create safety issues, just like the one here. With a proper investigation, Scott Roman would have probably been cleared of wrongdoing. He was not drunk nor was he speeding.

Scott Roman did not show reckless behavior by virtue of tragically hitting Joseph Deverson. What he did do, however, is show that he has no morals or compassion. Rather than stop and help Deverson, who was lying on the street dying, he drove off.  Scott Roman decided that trying to avoid punishment by fleeing the scene of an accident was more important than saving a dying man. His bail was set at one million dollars.

Even if Roman does beat his charge in court, his character as a real estate agent is ruined. There have been countless Facebook groups and webpages made calling for South Florida residents to boycott his business. 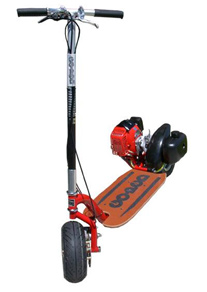 With the increased popularity of GoPeds, self-balancing boards, and other forms of gasoline or electric-powered scooters, motorists have a duty to be alert and look out for drivers in the street. Additionally, it people who enjoy riding these devices need to follow the state and local laws while riding safely.

Unfortunately, GoPed scooters aren’t allowed on public roadways in a number of states and municipalities.  The first rule of owning a GoPed is to find out local and state laws before riding it. If you are unsure, ask someone at your local law enforcement agency if they are legal to ride on the streets and sidewalks. If not, then you are limited to riding on private property.

GoPed is a popular scooter designer. They design electric, gas, and kick scooters. They usually have two wheels and look like a skateboard with handlebars. While they can be a fun way to ride around the neighborhood, you should exercise extreme caution before taking them on busy roads. In Florida, GoPeds are classified as motor vehicles. Because of this, they are prohibited from being driven on public sidewalks. However, they don’t quite meet the criteria to be registered as a vehicle, meaning that they are not legal to ride on the roadways as well.

If you are going to buy a GoPed, be sure to do your research before making the expensive purchase. If you’re in Florida, you should only ride on parks or private property.

Electric Scooter is your number source for all your scooter need. Call us today!

A Guide to Buying Your First Electric Scooter

Where Society Has Failed the Disabled