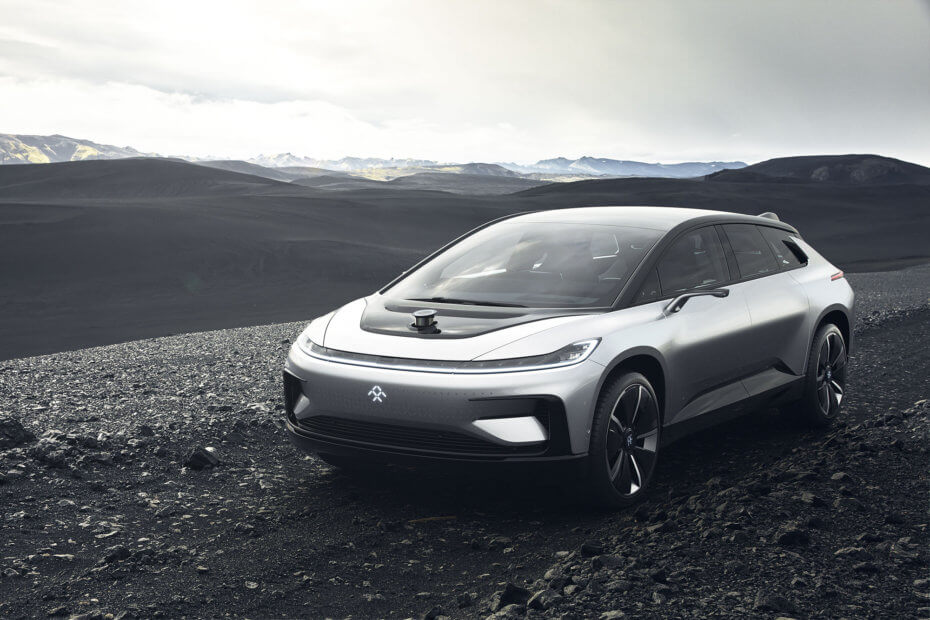 Even from the looks of its website alone – one can say that Faraday Future certainly means business when it comes to hopping on to the electric vehicle bandwagon. Upon checking the website to see more of its flagship electric car model, you would instantly feel that the car would just be the kind that Mr. Bond would drive, and the type of the car that would just be too cool for the Fast and the Future franchise. OK, enough about movies and we’ll see just how impressive the Faraday Future FF91 is.

The Unveiling at Las Vegas

The most recent CES trade show in Las Vegas just became the ultimate dream car show for the true enthusiasts. And one of the show stoppers of that Tuesday evening was the Faraday Future FF91 ( read as nine-one). The first wow factor – well, the company promises a staggering 300 miles of coverage on just a single charge.

Faraday Future has somehow kept the production plans of their first electric car concept until the  CES trade show. According to the company, this electric car boasts a massive 1050 horsepower. The acceleration is also one of the best features of the FF91 as it can go from zero to 60 miles per hour in just less than 2.5 seconds, or 2.39 to be exact. This electric vehicle is now giving Tesla Model  S P100D a run for its money as the FF01 is now found to be faster.  Read on and get to know how Faraday Future is also changing the game in the electric vehicle industry.

The Great Interior and Exterior Designs

At first glance, it is easy to conclude that Faraday Future, indeed, took ‘future’ to its overall design. The philosophy of the overall design of this car is based on aerodynamics. This electric vehicle boasts an edgy, sleepy, and rounded fascia up front and the angular rear to boost its aerodynamic efficiency.  Thus, with aerodynamic efficiency in the design, the range increases. The FF91 also bears that trademark UFO line around its mid-section.

It is also evident that this electric vehicle possesses stylish details from inside out. The gateway doors, for example, are equipped with stylish and innovative entry system to ensure better accessibility.  The door can be automatically and remotely opened. Moreover, the doors are ‘intelligent’ enough to detect the objects surrounding them. With the use of built-in sensors,  the doors are prevented from making contact with other objects by controlling how it should be opened.

It certainly does not end there – this smart electric vehicle is also highly focused on communication. This electric vehicle is capable on re-imagining its owns lighting systems by establishing a better and sturdier communication between itself and the driver. This FF91 can also recognize its users.  As the users or owners approach this electric vehicle, its rocker panel automatically illuminates to welcome the user. With advanced technology, the car is also capable of utilizing and determining intuitive patterns to send messages to the users such as welcome sequences and prompts on autonomous driving or charging states.

The interior of this electric vehicle also has a lot to offer. No need to worry about getting stuck in a heavy traffic. All you need to is the seat back and relax in the ergonomically and biochemically designed seats that recline at the most comfortable angle. This electric vehicle is equipped with first-class seating that offers great support for the upper back, lower back, lumbar, and lower legs. Best of all, it can also offer massage,  better ventilation, and heating – features that can maximize your driving experience even during a long drive or heavy traffic jam.

The panoramic   can also provide surprising features that can wow even the long-time car enthusiasts. The roof of this top electric vehicle is made from Polymer Dispersed Liquid Crystals glass which can be dimmed by simply tapping on it. The smart dimming technology provides passengers with instant shade and privacy.

This Faraday Fortune FF91 is also bound to be the first ever electric vehicle to use a retractable 3D Lidar. This is a vital component to bolster the redundancy features of the car and enable autonomous driving. Lidar essentially comprises 13 short and long radars, 10 HD cameras,  and 12 top-of-the-line ultrasonic sensors. The sensors are much more powerful that those installed in other types of vehicles.  The FF91 also boasts computing power which can extract pertinent data from all the installed sensors. The data will then be interpreted in order to help make correct or better driving decisions.

Another difference between this electric vehicle and other EVs available on the market now is the number of sensors that are installed in it.  The typical rear view mirror has been changed by a top-notch HD display that automatically merges the live feed from both mirrors as well as those captured by the rear view camera. The result? – a seamless image that can help the driver make sound decisions when it comes to operating the electric vehicle itself.  Blind spots are also eliminated as the cameras are strategically placed.  Better vantage point and improved computing system are all essential components to bolstering safety.

Another key feature of this FF91 electric vehicle is that is has a technology capable of driverless valet parking. Yes, the car can park itself once the driver has got off.  This is made possible with the app called FFCTRL. Using the same app, the driver can also summon the electric car from the parking slot, schedule the pickup time, and configure the pickup locations The system can be utilized in pricing roads and private parking spaces as well.

The Latest Electric Vehicle with Performance that Wows

The multi-motor set-up. The real-time torque and the technology used are three of the reasons as to why the FF91’s power terrain and superior acceleration are among to watch out for. These would likewise allow drivers to maneuver the car in dangerous freeways. The car also can also produce unparalleled motor power equivalent to 783 kW or 1050 HP.

The battery technology is also one of the best on the market now. It can power the electric vehicle for up to 378 miles based on EPA estimate or 700 Kms based on NEDC estimate. The battery is developed y LG Chem with its partnership with Faraday Future.  Aside from having the battery with highest energy density in the world, the compact design of which also offers users to maximize the space for better comfort.  What makes it an efficient car for everyday use is its recharging capacity. Have the FF91 fully recharged can take the user for more than 500 miles.  In addition, it only takes  4.5 hours to fully recharge the battery.

Reservations  of this Powerhouse Electric Car

It is not surprising that many have become keenly interested in this electric vehicle, given by the novel concept and top-of-the-line technology used in developing it. Faraday Future has announced that it will start accepting reservations for the FF91 via its company website.  To keep the public even more excited, Faraday Future is also giving the first 300 reservations the chance to upgrade to the Alliance Edition of the car which will be launched in March 2017.

The company also made a pledge to donate part of the sales proceeds to the environmental fund which will be utilized in carrying out the sustainability efforts of Faraday Future.  The very first unit of this model is also to be auctioned in March. Furthermore,  to excite all the car enthusiasts further, it was also revealed that the production of the FF91 electric vehicle shall be rolled out in the year 2018.