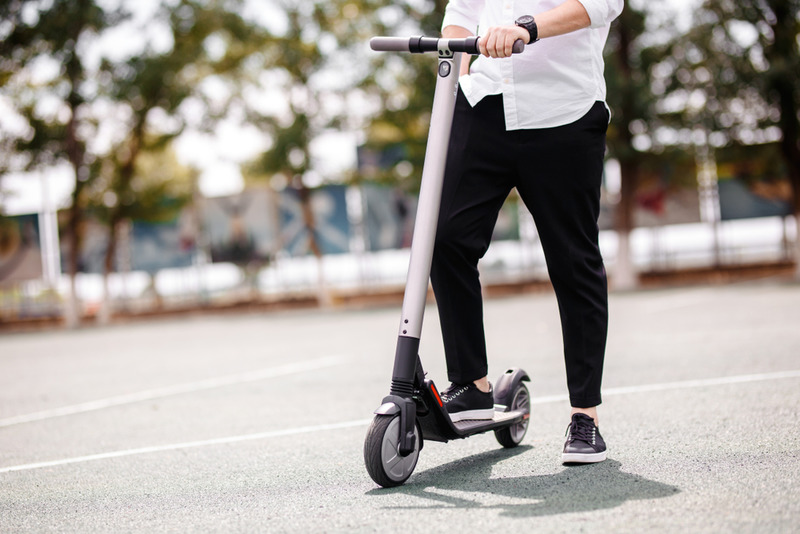 The electric Kick scooter is an efficient substitute to fuel fossil powered cars and trucks. The car is not an efficient mode of transportation when the car itself is the cause of its inefficiency.

Cars are inefficient because of its design. An average American driving his car weighs about 175 pounds. The US Department of Energy made a study in 2016 stating that American cars weigh up to 4100 pounds; its mass is 23 times the commuter it carries equating that most of the energy it harnesses carries its own weight to move the commuter from point A to point B.

The electric kick scooter efficiency has its definition based on its weight at an average of 28 pounds or 12.7 kilograms. Its working efficiency is much greater when it carries a load up to more than 10 times its weight using an electric motor to power it. The e-scooter carries the advantage of the energy it consumes to move from its origin to its destination. In fact electric kick scooters are so efficient that humans burn nine times more of their energy walking and four times more on a bicycle to reach the same distance.

Electric Kick Scooters do not emit carbon dioxide; it does not require a combustion process to power the vehicle and move its commuters. It uses stored electrical energy from its batteries that can be charged after every use. Riders save on gas and use an hour or or two to have it at full charge.

An electric car will consume 1 kilowatt of electricity to power it up to almost a mile or about three laps in an oval. A modern Tesla Model 3 e-car will approximately reach up to 4.3 miles ran by the same power or about 17 laps in an oval. But get a load of this, an electric kick scooter can reach up to 80 miles consuming one Kwh of energy from the source or 333 laps around an oval.

There are limitations for a scooter to discard its functionalities. Snow, rain, single rider, and with children or pets are some of the reasons why the e-scooter is not the best choice to ride. In the US, most rides are short commutes where 60% are less than 5 miles per trip. The rides are on a frequently solo trip. A large portion of these trips are the last mile rides. Last mile issues are those trips where commuters do not have a ride to their doorsteps or a transport system that will carry them from where they live to bus stations, train depots or the subway. The micro mobility transport is the solution to this concern of commuters at a cheaper cost and at the same time, an answer to the carbon dioxide emission problem.

An average car weighs 4.1 tons and the carbon dioxide emitted by producing it is seven tons while an electric car will spew out around 8 tons in its manufacture. Electric cars are still preferable when it comes to carbon emissions on the road.

An electric kick scooter only weighs 28 pounds and is much cheaper to manufacture factoring less than one percent of carbon dioxide compared to the production of the conventional car or the electric four wheeled vehicle,

Other Environment Saving Contributions of the Electric Kick Scooter

The e-scooters does not need massive infrastructure for its infusion to the transport community. HIghways or railways are too expensive for cash strapped cities to allocate their budget. But when the e-scooters consideration, they’ll just ride along where cars ran with no additional road construction, only space allocations like safe bike lanes.

These cost effective equipment will be a big help to urban planners on the machines’ goal to eliminate traffic congestion, air and noise pollution, and greenhouse gas emissions. Micro mobility is only part of the solution but a significant one to keep the ball rolling.

Shared rides of electric kick scooters are now a hit in the transport system in the US. Electric scooter companies are now channeling their funds to contribute to society. Not only does it provide solutions on traffic congestion and environmental concerns, but the business is very lucrative and attracts more investors to put their money in the industry.

Electric Kick Scooters made advancements in comfort and technology to lure commuters to use them. For instance, better batteries deliver longer travel distances and charges fast and efficient. Improved designs to attract riders and enjoy the ride while providing solutions to traffic and our surroundings.

The Asia Pacific Region counts as the most number of users in the world. A combined population of 4.1 billion people have the opportunity to have an e-scooter for their means of transport. China subsidizes its citizens to encourage the urban community to ply their streets as part of the problems brought about by fossil fuel emissions.

Electric Scooters on the Streets of Urban Communities

The presence of Electric Kick Scooter on our streets will hasten the dangers that we face daily. Our roads expose risks with the ubiquity of heavy cars emitting harmful gases. Public commute is laiden with pollution and has become a perilous place for cyclists, commuters, pedestrians, and motorists. The United States recorded that road travel caused 1,566 megatons of greenhouse gases emitted into the air that was responsible for 40,000 deaths every year. Our target is to drop the CO2 emissions to zero level. E-scooters will contribute to the attainment of this endeavor with the cooperation of governments and their people.

The public, with the help of their respective administrations, are ready to put this task into fruition. There is no time to lose, only benefits to gain for this directive. We can restart our priorities if we want to save this planet from the abuse it is taking from us.
Please visit our website at www.electricscooter.com and learn what an electric scooter can do for your short commutes.