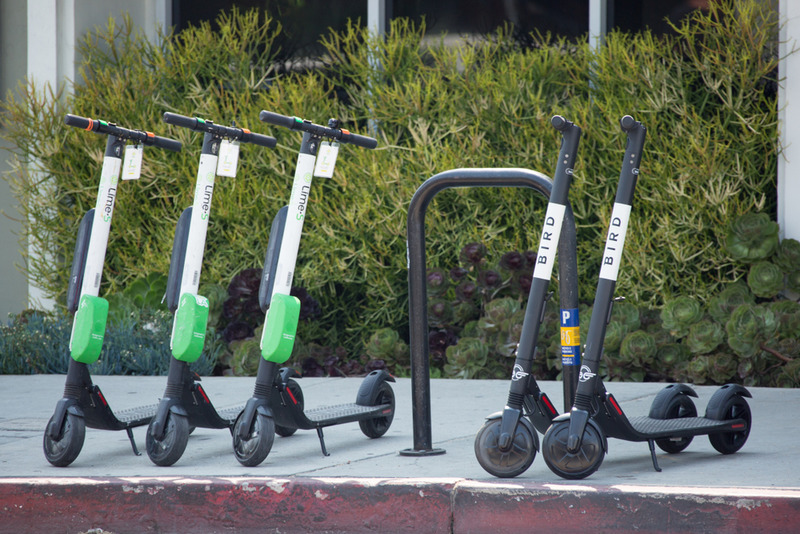 It’s quite ironic how Ninebot bought a company that once accused them of copyright infringement. Segway accused the Chinese company of copying its patented self-balancing two-wheeled scooter. Ninebot later announced that it will take over Segway but will continue selling their respective products until they solidify their alliance with a greener and smarter electric vehicle for short commutes. The Chinese conglomerate has the backing of Sequoia Capital, Xiaomi, and Shunwei among the top investors of NInebot. Four out of five e-scooter around the world comes from the Ninebot e-scooter makers.

This e-scooter model weighs 12.5 kg with an aerospace grade frame aluminum material. Its tires are 8.5 inches under a 3 cm wide pedalboard at a height of 87.5 mm. The top speed of the M365 is 25 km/h with a maximum torque of 16Nm. Its motor has a rating 250W and could climb an incline up to 14 degrees tops. Preferred terrain for the Xiaomi M365 model are cement, flat soil pavements, asphalt, bumps not over one cm high and less than three cm in width.

Travel distance for the M365 is 30 kilometers on a single charge on a 42V lithium-ion battery. Charging time is 5 hours with smart power management and protection against short circuit and overcharging. Batteries are temperature resistant and has undervolatge  auto-sleep protection. This model is a product of Ninebot/Segway.

Last year, Lime electric kick scooter company partnered with Segway to make their own units. The partnership resulted to the increase of the travel distance of the e-scooter from 23 miles to 35 miles. Other features improved for the benefit of the shared heavy duty markets scooting in urban communities.

On the safety parameters, Lime installed backlights in front and the back of the scooter for visibility in night traffic with flashing lights below the platforms. Enhanced braking were also in place on the front and back wheels.

Bird electric scooter company has its own models deployed in the market. Originally, the e-scooter company had the Bird Zero deployed last 2017 in Santa Monica, California. This model had a design that was not for heavy usage and would only last for 10 months on the field. The units were manufactured by Xiaomi and Segway/Ninebot.

The economics are in place for the Bird Zero but revenue analysis based more profits on every mile the e-scooter makes. More trips traveled by the e-ride, the more earnings it will bring to the company. E-scooter entities has to recover their expenses before they could turn a profit in the business. The move to enhance the life span of each electric kick scooter traversing the urban and suburban communities means a positive direction for the economics of the venture.

Bird CEO Travis VanderZanden informed the public that they could purchase the Bird One at $1,299.00. The model will replace Bird Zero for its durability, power, and longer lasting feature on the road. VanderZanden added that it will phase out the Bird zero and retain the Xiaomi models for rent on a monthly basis. Bird will no longer purchase the Ninebot ES Scooters from NInebot/Segway.

But Bird does not run out of innovations to cater the needs of the commuters lest the challenge to help government address greenhouse gas emissions. YThe company will always be a part of the solution in pursuit of a zero emission in our planet’s surface. The company will be launching the new two-seater electric vehicle for the share riding economy. Bird presented the “Bird Cruiser”, a combined look of the bicycle and a moped that can accommodate two rider. Launching of the model will be on summer in selected markets.

Bird Cruiser has hydraulic brakes on both wheels, a 52 volt battery and could climb hills. The Cruiser will support start up fleet businesses with the Bird Platform program that will allow entrepreneurs to run their own business using the company’s assets. The cruiser will be under the classification of e-bikes or scooters where its regulation is at the state level. Local regulations will  not affect its deploymen in the Metropolis where riders adherence to traiffic rules and regulations will take effect.

The Bird Cruiser is an addition to the micro mobility solutions that will be part to curb down traffic congestion, air pollution, and parking concerns in the city. With the Cruiser, commuters can move about the neighborhood in pairs without the use of a car.

New York will finally see the electric kick scooter and the Bird Cruiser scooting on its roads. The application is long overdue and will soon take effect. E-bikes and e-scooter will receive its legalization throughout New York but will let municipalities decide if they want these e-vehicles plying local streets. The burrough of Manhattan will not allow e-kick scooters on its streets in the meantime citing safety and sidewalk obstructions.

The future of electric kick scooters and two seater rides is bright, but will be at the regulated mercy of the cities that govern them. Regardless of the cities regulations and other hindrances that will limit the e-vehicle’s potentials, our environment found an ally in these machines that will solve urban problems and probably the world from global warming.