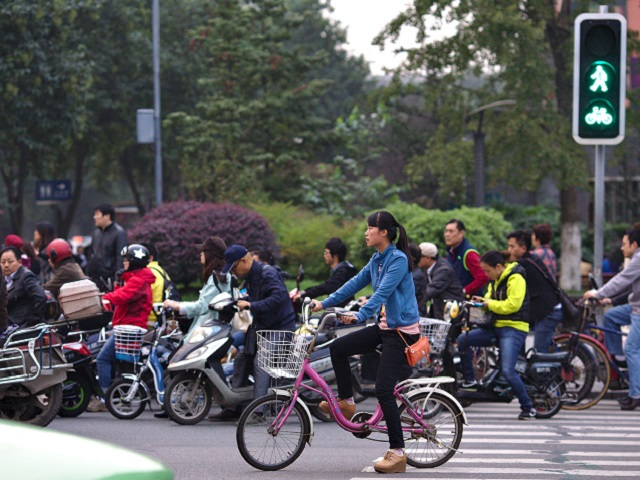 There is no denying that the booming e-commerce in Beijing, China has led to the proliferation of electric bikes in the dense city. Couriers now make use of two-wheeled and three-wheeled electricity-powered bikes alongside the thousands of others in the busy streets and intersections of this Chinese city. In addition, the number of private cars, scooters, and taxis continue to surge amid the fast and steady development of the country. But even in the modern times when the need for a more sustainable vehicles become more and more evident, riders of electric bikes in this Chinese city continue to receive backlash from fellow motorists and other pedestrians.

Battle of the Cars and the Electric Bikes

Liu Xiaoyan is just one of the several thousand others who make a living by delivering goods on behalf of an on-line shopping mall in China. His choice of transportation – a three-wheeled electric bike. In occasion earlier this year, he got caught up in a vehicular accident while trying to transport some parcels. His scooter tips over upon hitting car. What happened next is a typical scene in this heavily populated city. The driver of the scooter picks himself up while the driver of the car goes ballistic over his damaged car. The scenario is a testament to how inequality still persists in the modern age China. An unceasing conflict between the wealthier private car drivers and the middle class to poor electric bike riders still transpires in the urban china.

The Woes of Electric Bikes Owners and Drivers

Liu Xiaoyan is adamant that electric bicycles are not the real problems in Beijing – but the cars. However, with the growing demand for on-line delivery services, it is rather difficult to halt such skyrocketing growth. Even when Beijing and other key cities in China have considered putting a limit or regulating the use of electric bicycles. Some are even considering an outright ban. While many owners and frequent users of electric bicycles frown on the idea, the car owners seem to be delighted with the news. These car drivers complain about the bike riders who are violating traffic rules and constantly checking their smartphones fixed onto their handlebars. As for the pedestrians, many also complain about bike riders who unceasingly honk at them.

Many private citizens are also starting to get infuriated over irresponsible e-bike drivers. For once, a Canadian Beijing-based entrepreneur named Robert Earley also mentioned how unsafe he felt cycling in the said city. This Canadian who also works on the Clean Transport Initiative has been hot twice by bikes heading the wrong directions. One incident involved an electric bike and another one by a motorized bike. However, owners and users of electric bikes and the industries that highly make use of them believe otherwise. These individual that they are being unfairly blamed for the traffic problems caused by the fact that there are way too many cars now cruising the major thoroughfares of Beijing.

These owners of electric cars are actually highlighting one of Beijing’s biggest problems to date – there are too many cars in the city and the number is still growing. These cars are inundating the roads, clogging the lanes intended for bikes, and utilizing sidewalks as parking areas. One of China’s forefront experts on the emergence of electric vehicles , including electric bikes, retired professor Ma Guilong of Tsinghua University also sees the problem with the cars in the city. The retired professor himself has experienced a number of accidents while obediently riding his bike along the bike lanes. With such horrid experiences of bike riders – can one truly conclude that the e-bikes are the culprit of the emerging traffic problems in a buzzing city like Beijing?

The Future of Electric Bicycles in Beijing

The truth is that electric bikes will continue to be a boon to many online enterprises in China. The use of electric-powered bikes is becoming a favorite ride for the couriers who are mostly from the countryside. These couriers are trained to deliver the goods in the shortest time possible. In the year 2015, the Web-based retailer sales in the country have peaked at 3.88 Trillion RMB which is equivalent to a whopping $590 Billion. The figure is 33% higher than in 2014. With such boost in demand for delivery services and the ever-growing on-line retailer industry in China, the surge for more electric bicycles is inevitable.

Beijing Bicycle Industry Association chairwoman Guo Jinzhi believes that the availability of electric bikes has also become a factor that strengthened the growth of the e-commerce industries. She stressed out that the cost of logistics of e-commerce would be too high if it weren’t for these electric bicycles. On the contrary, the urban planning of Beijing has not truly been designed to accommodate such number of cars. The roads were designed geometrically to boost control. For many years, the roads have been solely utilized for a few cars while there are also side lanes intended for the bicycles. However, the reality of today in Beijing reflects the exact opposite of the design. The roads are flooded by all sort of vehicles – from cars to scooters,bikes to hoverboards, alongside the wave of people trying to push through busy intersections.

For lunch delivery personnel, going through the immense traffic at noon is just one part of the problem. Driving at night where car drivers have bigger tendency to be reckless is tantamount to playing with your life. It is no longer unusual to witness cars do an abrupt or sharp U-turns. It has become common to see car drivers switch lanes in an instant. Being on the same road such as these cars or the buses is just one of the issues that many electric bicycles users have to deal with every day.

China and its Growing Love Affair with Electric Bikes

At some point, bicycles ruled most of the roads in Chinese cities. The introduction of electric bikes dates back in 1996. However, it did not come through with the number of pedaled bicycles back then. At present, there are about 5.6 million of motorized vehicles on the roads of Beijing despite the on-going restrictions on the sales. The number of electric bicycles is also now growing by around 300,000 every year, adding to the 2.5 million of electric bicycles actively being used on Beijing roads. Despite the effort of government to ban the unregistered three-wheeled e-scooters in 2014, the number of users has continued to rise.

The use of electric bicycles is also now considered as the choice of transport for the young employees in China who are from the countryside. The chairman of Luyuan Electric Vehicles Ni Jie also reiterated that the use of electric scooters has become a driver of the Chinese urbanization. This is also due to several factors. First is that electric scooters are not as expensive as cars. In fact, they only cost a few hundred of dollars. Secondly, owners can use them even without any license. Third, many get away from using their electric bikes even without licensing them. These reasons alone make owning an electric car rather tempting.

While it is quite a breeze to own and use electric bicycles in Beijing, one has to also know the possible danger that comes with it. According to the statistics from the World Health Organization, about 60% of the average 260,000 death toll in China every year are accounted for motorbike riders. The central government is still in the process of consolidating its regulations on the use of electric bikes , particularly on the aspects of weight, battery size, and more importantly , speed. Whether you are using electric bikes in Beijing for work, leisure, or do personal errands, the knowledge or traffic law, discipline, and respect of others should remain paramount.