Are Electric Scooters Good for the Environment?

Safety is not the only concern though. E-scooters have gone under increasing observation for their environmental impact. Although some models are emission-free at the point of use, the process of manufacturing, managing and moving them results in greenhouse gas emissions, which then increases if they have a short lifespan. Most e-scooters need to be charged, collected, and redistributed regularly, most of the time using fossil-fuelled vehicles. The question is, are electric scooters good for the environment?

A study in 2019  by researchers at North Carolina State University, taking into consideration the emissions produced by moving and making e-scooters, suggested that they typically produce more emissions per passenger mile than a regular bus with high ridership, an e-bike, an electric moped or a regular bicycle. These findings are followed up by research from the Lufthansa Innovation Hub ranking estimated carbon emissions of different transport types, which shows average emissions of dockless e-scooters are much higher than those of e-bikes, buses, trains, electric and hybrid cars and petrol-powered scooters.

These emissions can be decreased by decreasing the number of trips by operational vehicles to ferry scooters around cities. Currently, shared e-scooters are meant to last from one to two years, but because of both accidental and damaging e-scooters on purpose, many last much less time than that. Let us look at Louisville, Kentucky, Quartz estimated the lifespan of a Bird e-scooter was around 29 days. Many believe the dockless set-up is the one to blame. Dockless bike-share approaches were heavily criticized when “mass graveyards” of redundant bikes appeared. Could e-scooters be heading the same way? 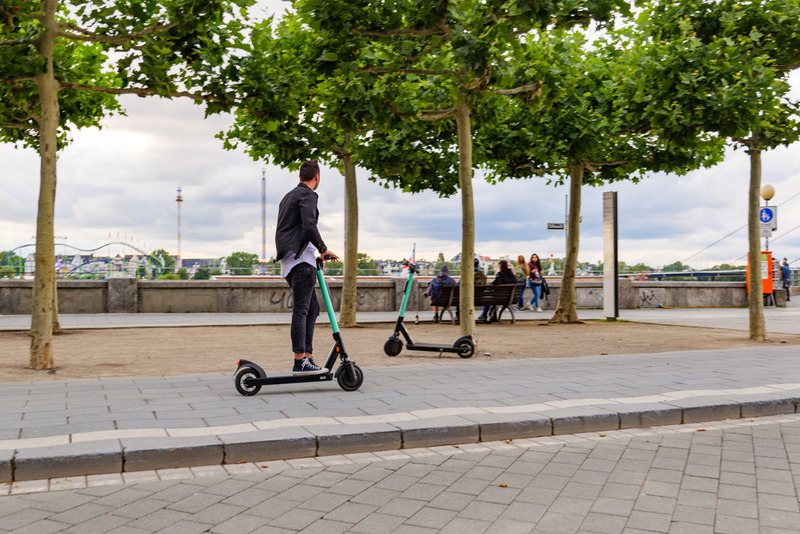 “Those companies in the bike industry took the approach of growth at all costs, but that is not what we do,” says the vice president at Bird, Patrick Studener. “In every city we start with 100 or 200 scooters, then we will scale up into the demand that we see. Day to day, we scale up and down with demand.”

But travel habits differ across the world. In Wellington, New Zealand, 21% of e-scooter trips could have otherwise been made by car, with 39% of people driving a car less as a result of the e-scooter scheme. In Chicago, 43% of users could have travelled by car if the scooters were not available (30% could have walked). In Portland, Oregon, 36% of local users could have travelled by car instead, even though an even bigger percentage (45%) could have walked or used a bicycle, both lower-emission transport modes. However, 39% stated they drove less since the beginning to use e-scooters, suggesting positive behavior change.

Seemingly, shared e-scooter companies are giving attention to sustainability concerns, with some introducing the use of renewable energy in operations, electric operation vehicles, swappable batteries that reduce the need to move scooters away to charge, and extended scooter lifespans with better design and repairs.

Bird stated their latest e-scooter release lasts for up to two years, reducing environmental impact. By its own admission, Bird’s first scooters had lasted around three or four months. Lime promised to change its operation vehicles to 100% electric by the end of the year 2030, and signed a commitment with 75 companies worldwide to go for electric vehicle rollout. ‘“But we expect to get there much quicker,” says Andrew Savage, Lime’s head of sustainability. In Paris, the company has already switched its entire vehicle fleet to electric, as well as using swappable batteries to determine carbon savings.

Voi says its service is fully carbon-neutral, attained by including longer-lasting scooter design, swappable batteries, and electrification of their fleets. Voi implemented these measures in Paris. They were found to reduce emissions by 71%, based on a report from EY. Tier is currently working to move all its warehouses to run on electricity by 2021, as well as replace all diesel vans and have e-scooters using swappable batteries by the end of 2020. Tier’s operations in Sweden, Austria, France, and Switzerland already are run entirely on electric vehicles.

Getting used to Electric Scooters

This apparent commitment to sustainability appeals to governments in the coronavirus recovery as they aim to support transport needs that adhere to social distancing while keeping away from increases in polluting car use.

Although most shared e-scooters were taken out of service during lockdowns, they are slowly returning to cities, with enhanced cleaning measures. Meanwhile, retailers have reported sales of private e-scooters growing in places including Ireland, UK, and Finland. Things are set to change extensively in the UK, though. Shared e-scooter trials were decided for 2021 in four select areas, but in response to the new restricted capacity of public transport, were offered nationally and brought forward this summer. This answers the question, are electric scooters good for the environment?

Buying an Electric Scooter: What You Need to Know Before Buying